Well, today was a busy day. After a couple of weeks of nothing and a bit of stress all of a sudden today the appliances were delivered, they started to put trim in place and we got the tree damage from the other week cleaned up.

First came the appliance guys. Well, actually they came second, but the trim guys got here before the trim so they were pretty much just standing around waiting. Then the appliance guys showed up so they get first billing. Besides, the title, “Appliances, Trim and Trees” has a nicer ring to it.

The appliances showed up. The first question they ask, “Are you ready for them to be installed?” My answer, “Nope.” Lemme explain.

See, we had this delay with the countertops, but I was told to schedule the appliance delivery for the 28th anyway. So I did. Well, as this week was approaching, I’m emailing them saying, “Are you sure they should be delivering the appliances?” My concern was the electrical and plumbing wasn’t done yet so they wouldn’t be able to plug in or hook up the waterline on the fridge. The range was OK, that already had a gas line and an outlet, but I was a wee-bit concerned about the fridge.

When I point this out to Property Revival, their response was, “Sure, that’s fine. Have them deliver and install it.”

Me says, “How are they going to hook them up?”

They say, “It’s fine, have them deliver and install it.”

Me says, “How are they going to hook them up?”

They say, “We told you before it’s fine, don’t worry about it.”

Finally on Tuesday we had a bit of a heart to heart and all of a sudden they’re saying, “Uh, hmm, we’ll get back to you on that.”

So they scrambled and were able to get the electrician to come out Wednesday and hook up the electrical, but the plumber couldn’t make it.

Forward to today and we decide to let them install them both without the waterline for the fridge. Property Revival will then have to pull it out, install the waterline, and then put it back. People. 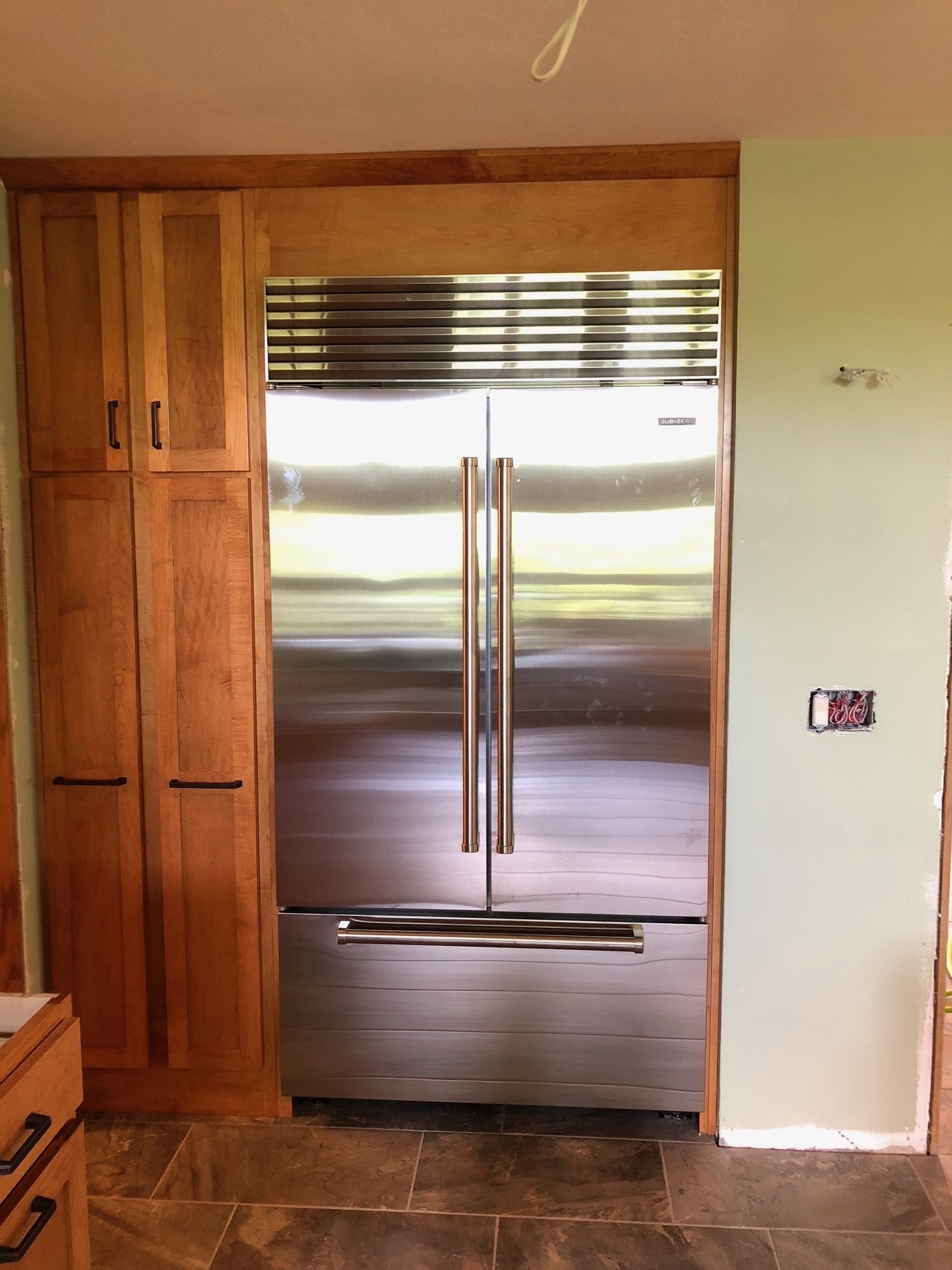 I finally got my fridge. I like that. That’s exactly how I was picturing this looking. And it works! 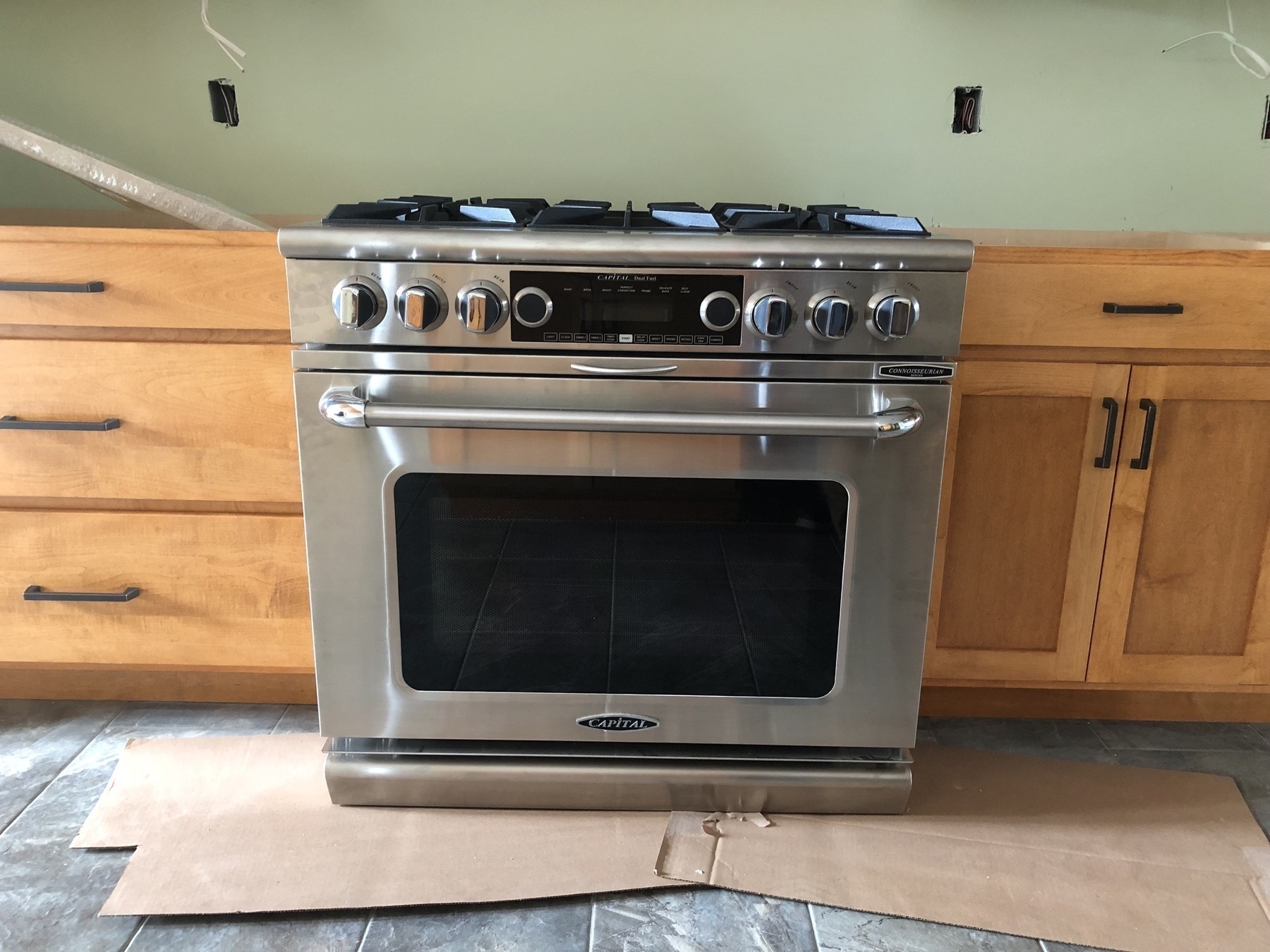 Yeah, it’s not totally in place yet. A little more story. See, turns out the range is a direct wired hookup, no plug, it has to be hard-wired in place and we have a plug there. Also, the gas line coming up from the floor sticks up too high so the plumber will have to shorten it. So the range isn’t exactly in place quite yet, but both of those things should be done tomorrow. Stay tuned.

And while all that was going on, the trim showed up and the trim guys got to work. I have to say, they do a really nice job. They put in the cabinets and now they’re finishing up the baseboard and door trim. We like it. 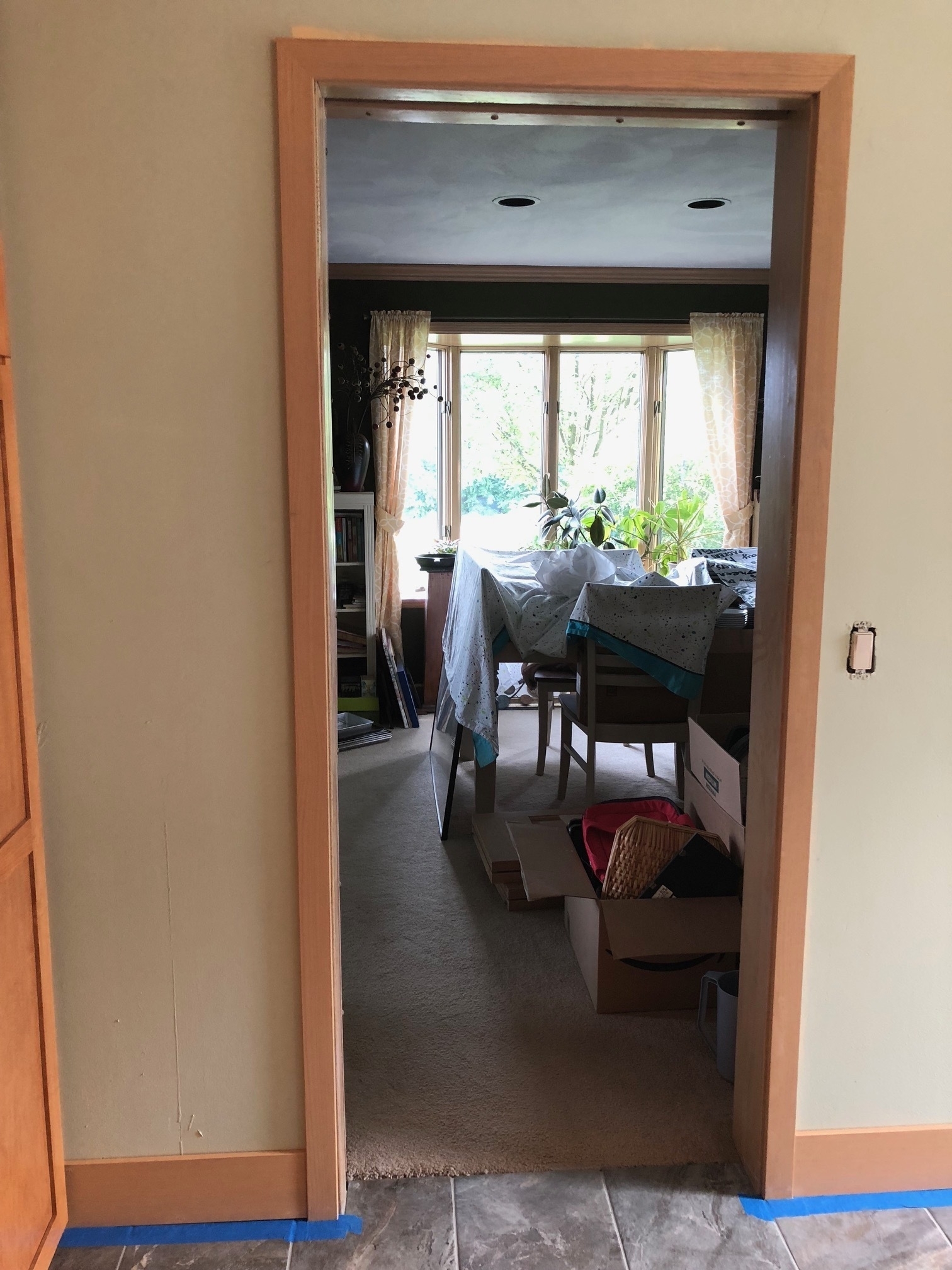 Professionals. Way better at mitered corners than I am.

And now on to the final topic of this post. Last week, we had some storms come through Janesville. Not officially a tornado, but as I was driving down one of the main streets to my house after work there was an awful lot of tree damage and crews out. I said to myself, “uh, oh.”

I got home and the front was fine, but one of the trees in back, not so much. 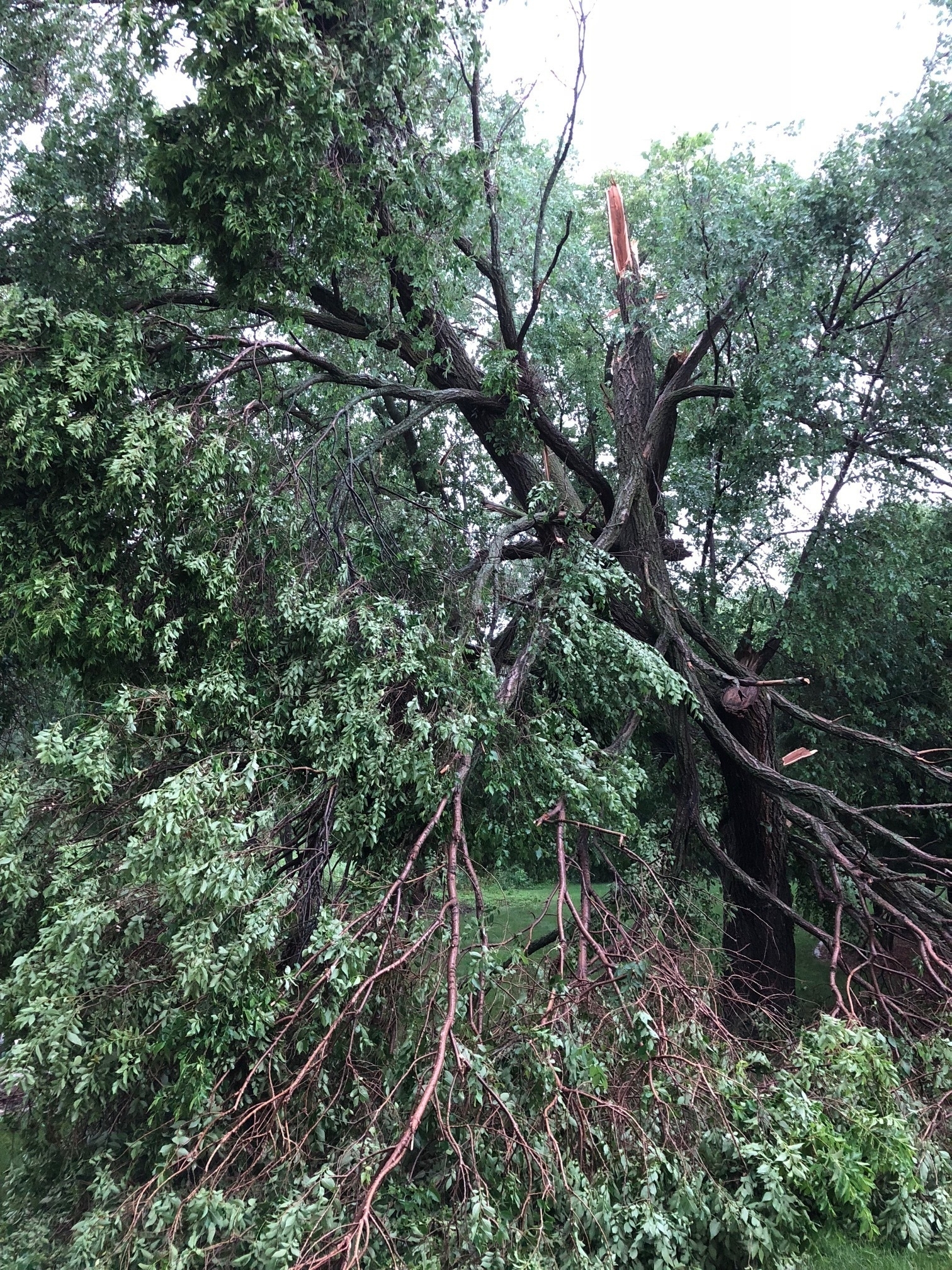 We were finally able to get Paul’s Tree Service to come out here and get it cleaned up for us. They did nice work. 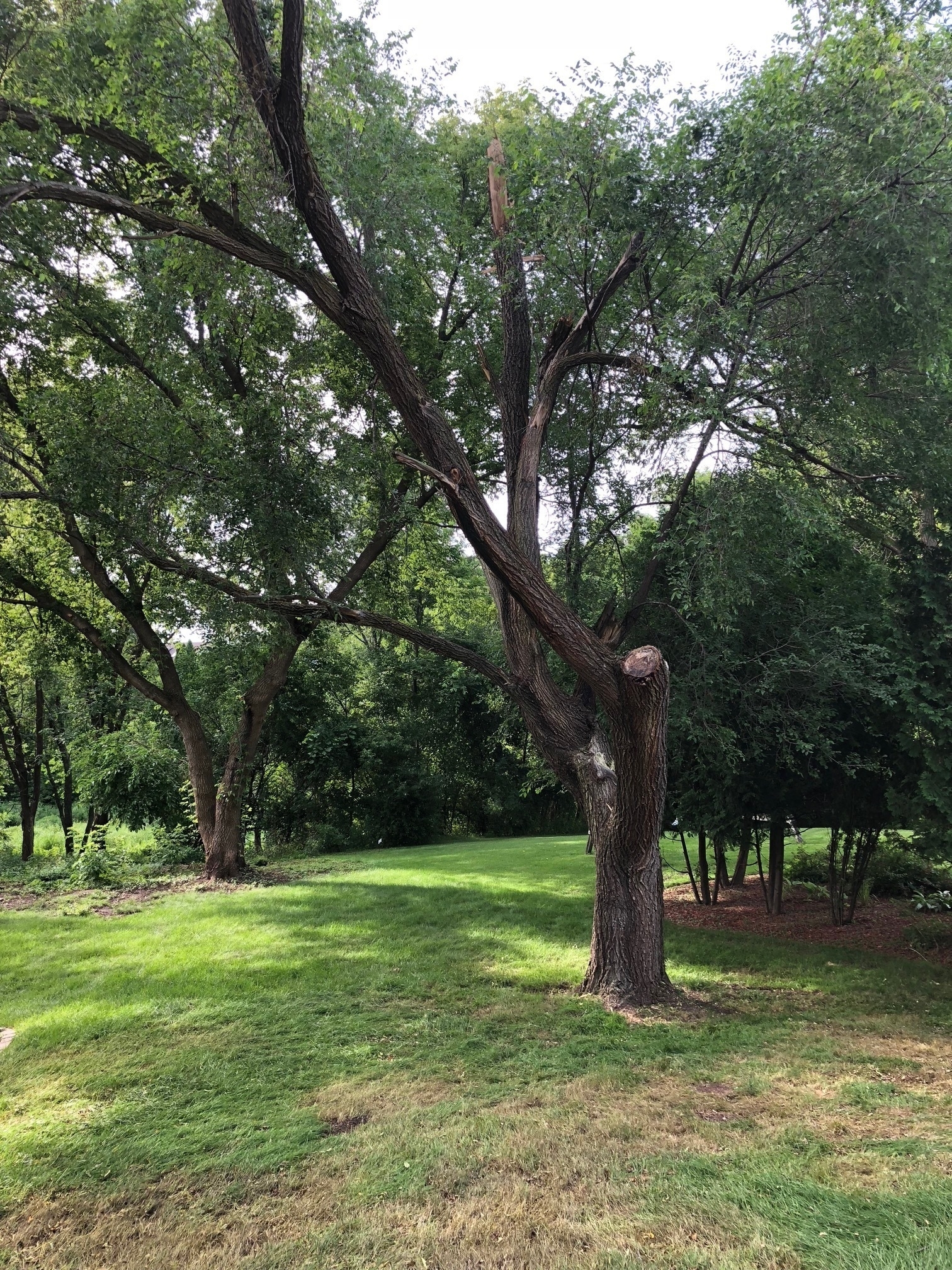 And that’s the end of my grand adventure for the day! Pretty hectic first thing in the morning, but turned out well overall.